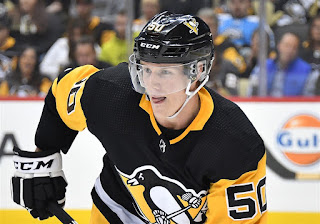 I didn’t really want to do another ‘Jack Johnson is not good’ or even ‘Juuso Riikola should be getting
more playing time’ posts, mainly because you can go to twitter and get a thousands of those opinions.

The extension of Riikola was confusing for several reason, and almost none of them are because of his ability to play defense.

With the salary cap already staying the same this upcoming season, that was already going to make for some hard decisions for the Pittsburgh Penguins front office. They brought in Kasperi Kapanen without really moving any money around.

They are eventually going to have to trade one of their goalies, with all signs pointing to Matt Murray being the odd man out. But he is a restricted free agent, meaning that he is currently counting as nothing against the books for the upcoming season.

Tristan Jarry, who the team appears to be leaning towards keeping, is also in need of a new contract. As is Jared McCann, who is an intriguing name to watch during the offseason.

They could have focused their attention elsewhere, and circled back for a potential seventh defensemen in free agency, and likely got him for the minimum.

That is, unless your planning on using Chad Ruhwedel as your seventh defender, which makes the Riikola signing even weirder. Is one of Johnson or Riikola switching sides and going to play right defense? Or does that mean Ruhwedel is getting penciled in as the sixth defender?

Also, why sign a guy you refused to play? The Penguins seemed to be willing to let him play winger in emergency then getting consistent playing time at defense.

It will be interesting to see how any kind of rotation works out, and if they give Riikola more playing time, as his metrics indicate he is perfect for the third pairing, and could be in for an even better season should he crack the lineup more.

I really didn’t want this to be a ‘piling’ on piece, we all know that Johnson has struggled since coming to Pittsburgh. The numbers say so, as does the eye test. There’s been a saturation of content throwing up both numbers and film to prove it.

It’d be easy to point out how much better Riikola is than Johnson. That’s probably the lazy way to go too.

What’s even more fascinating isn’t how much of a better fit Riikola is as the third pairing defenseman for the Penguins than Johnson is, but how he compared to the rest of the league when it came to limiting the opposition.

As in, there wasn’t anyone better than him in the league at doing so.

Expected Goals Against (xGA/60) is a statistic that measures a players’ oppositions shot type and location,  how often someone should be scoring. The more shots you take in ‘prime areas’, the more likely you should be scoring.

High-Danger Chances (HD) are shots taken in the most opportune places on the ice. Places that if you consistently takes shots from there, your going to be filling the back of the net.

When it comes to xGA/60 and High-Danger Chances Against per 60 (HDCA/60), among all defensemen that played at least 400 minutes at 5v5, Riikola recorded the best mark in both metrics.

He didn’t finish in the top 10, 20, or rate out as a ‘top-pair’ or ‘top-four’ defenseman. He finished first in TWO different metrics that gauge how good a player is at limiting the opposition scoring opportunities.

It’s just crazy to think that he was a healthy scratch for more games than he actually played in. Now with a multi-year deal in hand, will that change this upcoming season?

We will have to wait.

- He finished 28th among defensemen in rebounds created per 60 minutes. Ideally, you want to put the puck in the back of the net, and that may come with more playing time, but as a defenseman, if you throw a puck at goal and it doesn’t go in, your hoping the goalie can’t cover it up and it gives your forwards a chance to finish the play.

Riikola was one of the better players at doing so in the league.

- His personal ixG/60 was 0.25, tied for 27th in the league. His actually G/60 was 0.14. He isn’t going to light the scoreboard on fire but it definitely shows he may have some offensive upside.

- Riikola was a literal puck-moving-possession machine. The acquisition of Kapanen shows that they want to get even further back to being a fast-paced up-tempo type of team. Playing a defenseman that allows you to play that way only makes sense, right?

What are your thoughts on the Riikola contract? Will the Penguins get him into the lineup more this upcoming season? Let us know what you think in the comments below and follow me on Twitter @AJ_Murfy