It was a special night for Sidney Crosby, and the Pittsburgh Penguins, as their captain played in his 1,000th career game. It was an awesome tribute for one of the best to ever play the game, but in the end they still had a game to play.

Tristan Jarry stayed hot, keeping the Penguins in the game, and Kris Letang scored multiple goals as Pittsburgh topped the New York Islanders by the score of 3-2.

Crosby recorded an assist on both goals scored by Letang, who opened the scoring for the Pens as well as recorded the game-winning marker.

After a defensive gaff that saw Mike Matheson caught in no man's land, he made up for it with his first goal as a Penguin, tying the game at two in the third period.

Jarry made 33 saves in total, 16 of which came in the third period that saw the Islanders control easily. New York would easily outshoot the Penguins by a final total of 35-18.

Penguins 3 - Islanders 2: By The Numbers

The Penguins were completely dominated in shots and shot attempts against the Islanders. New York had 52 shot attempts compared to Pittsburgh's 38 (42.22%). The expected goal share went as you would expect in a game where the chances were heavily in favor of the Islanders, with the road team controlling 63.77% of said opportunities. 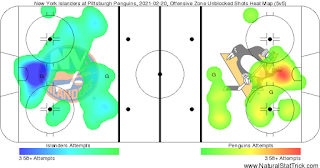 This was certainly one of the better games that Sam Lafferty played this season. He recorded an assist on the Matheson goal, had three shot attempts on his own - one of which went off the post. He put his speed to use again to play a tough, physical game that resulted in four hits as well.

Despite the Penguins as a team being completely out shot and out chanced, Lafferty came out positive in both categories while playing at 5v5. He broke even in shot attempts (10-10), but controlled the expected goal share while he was on the ice (53.20%).

It seems like it's one step forward, two step back for Evgeni Malkin and his wingers in that case. They had perhaps their best game of the season on Thursday, with Malkin registering his first multi-point contest.

Malkin was on the ice for both goals at 5v5, and in both instances he wasn't even in the defensive zone when the Islanders scored.

He did miss some time with an undisclosed injury, and we will have to see just how much that lingered the rest of the game.

As for the trio of Malkin-Jason Zucker-Bryan Rust, they registered 12:06 TOI together, and were dominated in just about every metric. Only 36.36% of the shot attempts, 33.60% of the expected goals, and even just 15.38% of the actual shots on net. Not a good outing for a line that really could have used the momentum.

Mat Barzal was a man on a mission tonight, even if he didn't get on the score sheet. He controlled the puck in the offensive zone, and drew in two defenders on the Jordan Eberle goal. the 23-year old forward also led the game in scoring chances, with five on his own while at 5v5, according to Natural Stat Trick.

Jarry faced 13 total high-danger shots, putting aside 12 of them. If there was ever a game the Penguins needed him to steal, it was this one, and he came through. Another huge step forward for Jarry.

What were your observations of the game? What moment stuck out for you? Let us know in the comment section below, subscribe to the site at the link above, and follow me on Twitter @AJ_Murfy.