When the Arizona Diamondbacks selected Pavin Smith with the seventh overall pick in the 2017 draft, they were getting one of the best offensive players available.

Now going on four years since they drafted the product University of Virginia, the Diamondbacks are starting to reap the benefits of their selection.

The 25-year old rookie first baseman/outfielder is among the top first-year hitters in the National League. Smith ranks second in doubles and runs scored, tied for fifth in home runs and RBIs.

Smith saw his three-year career at UVA finish with his junior year that saw him hit .342/.427/.570, launching 13 home runs while driving in 77 runs. He also only struck out 12 times compared to 38 walks, so he is no stranger to hitting.

After a 12 game stint in the big leagues in 2020 where he hit a home run and drove in four, Smith has become a regular in the lineup this season and he has been one of the best in the league in making solid contact on the ball.

According to statcast on MLB.com, Smith ranks tenth in baseball in exit velocity events of over 95 MPH with 59. He is one event behind notable names like Giancarlo Stanton, Paul Goldschmidt and Freddie Freeman.

Smith also ranks third in percentage of swings that result in a 'hard hit' (95+ MPH) as his 24.3% trails only Ronald Acuna Jr and Manny Machado.

Something else that Smith is growing into is his role as the team's leadoff hitter. The versatile Smith is one of 21 players to have over 100 plate appearances batting out of the leadoff spot, and his hitting numbers while doing so puts him in some impressive company.

Smith has gotten here by showing the kind of ability to hit the ball wherever it is thrown in the strike zone that you would expect out of a former top ten pick.

No matter where you put it, Smith has been able to hit it. 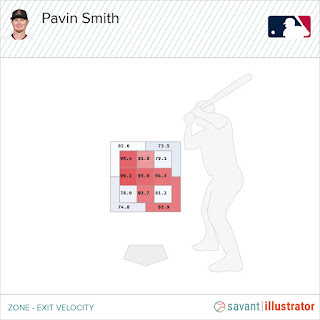 This shows Smith's average exit velocity by heat zone. This shows that he hits the ball the hardest when the ball is up and away. When you add in down the middle, and middle-up, you can definitely see the pattern of where Smith is going to want to see the ball so he can drive it.
But looking at his wOBA heat chart, his highest value comes when the ball comes in on the inner half of the plate. 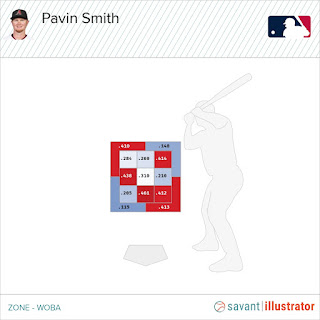 Smith may hit the ball harder on the outer half of the zone, but he also creates offense at a higher rate when it comes down-and-in.
The Diamondbacks are currently 18-24 in the NL West division that not only features the defending World Champions but the very stacked San Diego Padres as well as the early surprising team in the San Francisco Giants.
So the chances of Arizona making a playoff run doesn't seem likely, but they do have some interesting pieces in place, with Smith quickly becoming one of them.
Another is Kole Calhoun, who hasn't played so far this year after undergoing knee surgery in the offseason. When he does return it creates an interesting situation with both in right field, but that's where Smith's versatility takes over.
Smith has played over 100 innings at both right field and first base, as well as 67 in center field. He's played less than a game's worth of innings in left field, but that isn't surprising with David Peralta out there.
*Savant Illustrator pictures were pulled before the Monday games and don't reflect the Diamondbacks' game against the Los Angeles Dodgers.
What are your thoughts on Smith's rookie season? Where would you rank him among NL rookies right now? Let us know in the comment section below, subscribe to the site at the link above, and follow me on Twitter @AJ_Murfy.