The Pittsburgh Pirates dropped the final game of their weekend series against the Colorado Rockies, blowing a late lead preventing them from completing the sweep.

Chase De Jong made his season debut for the Pirates, and pitched brilliantly, putting the home club in a position to win and earn a sweep of their series against the Rockies.

Adam Frazier opened up the scoring, doubling home Ka'ai Tom after the outfielder walked and later advanced to second on a sacrifice bunt by De Jong. The Rockies immediately answered the following frame with Charlie Blackmon tripled home Yonathan Daza.

The Pirates had an opportunity to open the game wide open in the fourth as both Gregory Polanco and Will Craig singled to start the inning before Eric Gonzalez walked to load the bases - all with no outs. Pittsburgh would score two runs to take a 3-1 lead, but the ball never left the infield.

Tom drove in a run on an RBI infield single, and Frazier knocked in another on a ground out. Kevin Newman popped out to end the inning.

Kyle Crick walked a run in with the bases loaded in the top of the eighth to bring the Rockies within one before Blackmon and Matt Adams each drove in runs against Pirates' closer Richard Rodriguez to give them the lead.

There wasn't too much more you could have asked for from De Jong. He pitched five strong innings, faced one batter in the sixth to get to the left-handed hitters of Ryan McMahon and Blackmon and handed the ball off to the bullpen.

That's where the struggles began for the Pirates, as the normally strong Pittsburgh bullpen labored through until finally surrendering the lead.

It took five pitchers to make it through the last four innings, and outside of Chasen Sherve taking care of the lone batter he faced, it was rough sailing throughout.

Crick has turned in a strong start to the season, but this outing won't be going on his highlight reel. The righty couldn't find the release point on his slider and that led to two walks and a hit batter.

He was pulled for Rich-Rod who looked to finish out the game and earned the first four-out save of his career.

After getting out of the eighth inning unscathed, Rodriguez surrendered hits to Blackmon and Adams to allowed the game to be tied and eventually give the Rockies the lead.

It certainly was a frustrating way to end the series, after blanking the Rockies over 14 innings on Saturday, but the Pirates still took two-of-three after losing six straight and got another hit from Frazier.

Is the book out on Rich-Rod?

The Major League season is a long one. Like a really long one, so making hash decisions after one outing isn't something that's going to allow you to escape with a sane mind by season's end.

Except when you're talking about teams figuring out your pending free agent closer who has the highest usage rate of a fastball in recent history, right?

That's the book on Rodriguez, and looking at the Rockies record, they are probably the least likely to fill in the books that he is essentially an one-pitch pitcher.

Rich-Rod hadn't blown a save all season using his mid-90s fastball at a rate not seen by a righty in quite some time.

So does this mean the book is out on Rodriguez and we should expect him to get hit a lot harder like he was on Sunday?

He has allowed three runs in his last two outings going back a couple of days ago. Before that, he had allowed just a lone run in his previous 19 games played this season.

Four of his ten hits he's allowed on the year has also come over the past two games.

Team's at this point probably are realizing that he isn't going to throw anything else and have adjusted accordingly.

He also left two pitches over the plate, and because his fastball isn't exactly overpowering you should probably expect to get hit hard especially when facing good hitters. 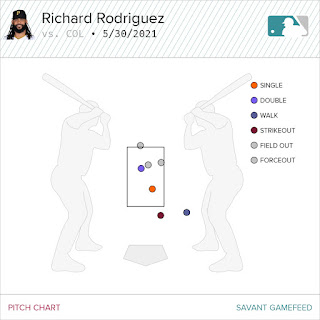 The fastball thrown on the double allowed was just 92.4 MPH, and the single was 93.4. Not exactly overpowering, so it's not surprising they were hit hard when left in those spots.

Still, it's hard to overreact after just one a couple of outing, considering how good he was at the beginning of the year.

Do you think teams have figured Rich-Rod out? Or the last two games have just been an anomaly? Let us know what you think in the comment section below, subscribe to the site at the top of the page and follow me on Twitter at both @SportBlogMurphy and @AJ_Murfy.