In The System: Altoona Rained Out, Greensboro Drops Opener by Walkoff Walk 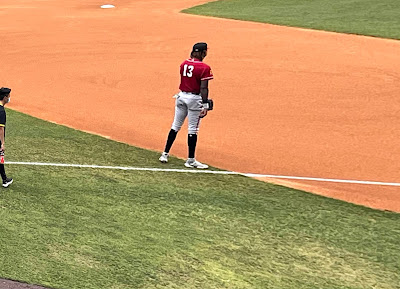 It was a busy day in the Pittsburgh Pirates system on Tuesday, kicking off another minor league week. There was one less game that it could have been, as the Altoona Curve's game was postponed till Thursday due to rain.
So, how did the rest of the system fare? A quick rundown of Tuesday's night action

The Indians managed just six hits, dropping the series opener against Iowa. Will Craig hit his team leading eighth home run of the season, and Cole Tucker drove in the other run, going 1-for-3 in the process.
Cam Vieaux (2-2) got his second start of the season and only pitched 2 2/3 innings. The lefty allowed five hits, seven runs (only four earned after a Wilmer Difo throwing error), while walking two and striking out three. He also allowed two home runs as well.
After Vieaux left the game, Matt Eckelman pitched three innings of one-run baseball, logging two strikeouts. In total, Indy used six pitched to make it through the game.

What a disappointing #RoansyDay, we didn't even get to see him pitch?! The new addition to Baseball America's top 100 prospects will have to wait another day to dazzle fans again.

Oliver Garcia couldn't find the strike zone, walking in the game winning run in the bottom of the ninth, surrendering a free pass three times.
Quinn Priester got the start, and struck out seven in four innings, but struggled with his control - only 38-of-65 pitches went for strikes. Not a horrible number but it played a big factor in him not going deeper into the game.
Will Kobos pitched two scoreless innings in relief, allowing a lone hit while striking out four.
It was a tough night for the vaunted top of the order, with the 1-2-3 hitters combining to go 1-for-12 on the night with only Liover Peguero collecting a hit. Jared Triolo recorded the team's only extra base hit on the night, with Greensboro also going 0-for-6 with runners in scoring position.

Drake Fellows, acquired in the Joe Musgrove trade, started and pitched two innings, allowing three hits. He was relieved by Carlos Campos, who threw another four innings and struck out four batters. Claudio Finol went 3-for-4 with a RBI and a run scored.

Carlos Jimenez, just 18-years old, started and struck out five in four innings in his first outing since coming stateside. Jake Sweeney, standing a towering 6'7", struck out eight batters in just three innings. Luis Hernandez went 2-for-4 with two runs scored while Carlos Canache drove in two runs of his own.
What performance stood out to you the most? Let us know in the comment section, subscribe to the site with the link at the top of the page, and follow us on Twitter @SportBlogMurphy.
Also follow me on Twitter @AJ_Murfy.
Altoona Curve Bradenton Marauders Greensboro Grasshoppers Indianapolis Indians MiLB Pittsburgh Pirates
Location: Virginia, USA