The Pittsburgh Pirates have one of the best farm systems in all of baseball, and with so many names to follow, one has stood out above most this year. That's Altoona Curve right handed pitcher Roansy Contreras.

Contreras was acquired in the haul of prospects from the New York Yankees in the deal for Jameson Taillon. While it will take years to truly grade out the move, there is no doubt that the Pirates are easily winning the deal.

Pittsburgh landed four prospects for Taillon - Contreras, Caanan Smith-Njigba, Miguel Yajure and Maikol Escotto. Two of those players, Contreras and Smith-Njigba play for the Pirates Double-A affiliate, Altoona, and I was actually in attendance for the opening game of their week long series against the Richmond Flying Squirrels.

Ji-Hwan Bae led the game off with a single, and was able to advance to third on a perfectly executed hit-and-run by Oneil Cruz. The Curve's starting shortstop hit the ball exactly where the opposition was when Bae took off and put runners on the corners with no body out.

It was an interesting storyline heading into the game for Contreras, who for the first time on the season was roughed up a bit in his last start. After not allowing a single run in his first three starts, the 20-year old Contreras was roughed up for five across four innings of work. He allowed four hits, and walked another three in that start last Tuesday.

Things didn't start off ideally against Richmond, either. Contreras opened up the bottom of the first with a strikeout, but then allowed a single and a double to place two runners in scoring position and just one out.

A strikeout of David Villa made the second out, but Contreras would go on to hit Vince Fernandez to load the bases. He'd get Jacob Hayward to groundout to get out of the jam. 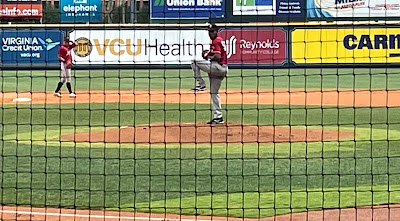 Frankie Tostado led off the bottom of the second with a single, the third allowed by Contreras in barely more than an inning pitched. He settled down and retired the next eight batters, using a perfect mix of his upper-90s fastball - that was touching 97 MPH all the way to the end of his start - with his breaking and off speed pitches.

By the time he finished his six innings of work, Contreras allowed just four hits - didn't walk anyone - and struck out eight.

Richmond looked silly swinging at some of the pitches, and the load pop coming from the catcher's glove when Contreras was pitching was generating buzz by even the home team's fans.

The game remained 1-0 until Rodolfo Castro bounced one off the left field wall for a double that also scored Bae.

As the game went on, you kind of got the feeling that Altoona was going to hit one over the fence at some point. They were starting to make solid contact with the bat. Cruz and Castro each took a pitch right to the warning track on back-to-back at bats.

In the end it was former Georgia Tech catcher and 12th round pick of the Pirates Arden Pabst who went deep, hitting a two-run bomb in the seventh inning that made it 4-0.

John O'Reilly would come in and earn his second save of the season, pitching two-innings out of the bullpen in relief as Altoona would go on and win 4-1.

Some news and notes from the game. 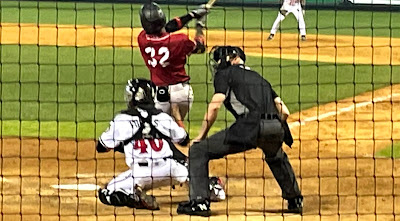 >> There are a lot of guys in this lineup that have some legitimate power in their bats. There is a lot of swing and miss in their games too, however. While Altoona put some good wood on some balls that ended up being outs, they also struck out 11 times. After driving in the first run of the game on a sacrifice fly, Mason struck out his last three at bats.

>> The best thing about seeing Contreras pitch live was definitely the reaction from the crowd watching him pump heat for six innings. Also the fact it looked like he was getting stronger as the game went on. He struck out the side in the sixth inning and was still hitting 97 MPH at the end of his start, that's impressive.

He is so fun to watch pitch. Contreras is the kind of player that could fly through the season if/when the Pirates decide to convert him to a reliever. Hard to make an argument to do so, however, as the righty has pitched at least six innings in three-of-five outings this year.

>> I liked seeing how aggressive the Curve were on the base paths, especially at the top of the lineup. Bae was moving early and often, running as a part of a hit-and-run in the first inning and later stealing second base in the sixth. Castro and Cruz both stole bases, giving the Curve three on the day.

>> Completely random fact, I'm a big Miami Hurricanes baseball fan. Watch them whenever I can. Was cool seeing former Hurricane Jacob Hayward play. I was a big fan of his and Willie Abreu when they both played as Hurricanes. 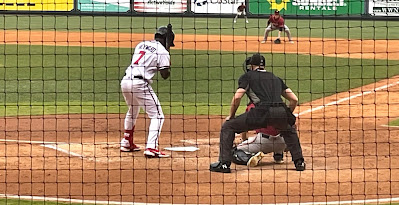 >> Personal opinion of mine, but I don't get the point of having the pitchers hit in the minors. Takes a bat out of a player you want to see hitting for a guy that is barely going to. Contreras struck out twice and O'Reilly even batted and was called out looking.

>> It was pretty cool seeing Pabst going deep. The former Georgia Tech catcher has now spent part of three seasons with Altoona and has hit just 20 home runs since joining the Pirates' organization in 2016. It was a no-doubter as well. Even better.

>> Heckling isn't cool or funny. It's annoying. Especially in minor league baseball. Let the kid's play. Just sit back and watch them play.