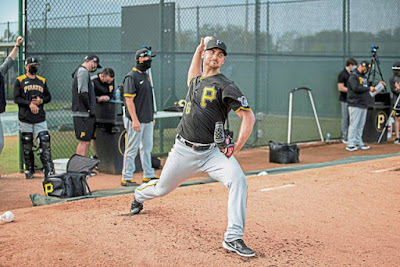 After a 2-0 loss in their series opener against the Colorado Rockies, the Pittsburgh Pirates look to bounce back in game two. On the mound for the Pirates will be Chase De Jong, who is still looking for his first win in a Pirates uniform.

It was a tough game to watch on Monday, between the wide strike zone, an absent offense and seeing Colin Moran leave another game due to getting hit by a pitch - it wasn't the most ideal way to start the week.

As they look to erase yesterday's effort they'll get Adam Frazier - currently second in the majors in hits - back into the lineup after a schedule day off.

Since the lineup won't be available by time this posts, I wanted to go over some numbers that involved the known starter tonight, De Jong.

He was brilliant in his season debut against the same Rockies he'll face tonight, throwing five innings of one run baseball, striking out five and walking one. The 27-year old was beat up in his next start against the Miami Marlins (5 IP, 7 H, 5 ER, 3 HR, BB, 5 K).

It's been back-and-forth as far as his outings have gone, almost reminiscent of what Mitch Keller was doing earlier in the season, just not as on-and-off as the latter.

He's definitely played well enough in some games, putting the Pirates in a position to win despite not going deep into games. De Jong has failed to finish five full innings in each of the last two starts.

In going back through his pitch tracking, it's been his breaking pitches - mainly his curveball - that has helped him enjoy the success he's had.

De Jong uses his fastball 50.5% of the time, according to Fangraphs. He has upped his curveball usage in each year since 2018, to the point where it's a breaking ball coming out his hand almost half the time (20.9% slider usage, 24.9% curve).
As we see here, De Jong usually uses his fastball up in the zone to set up his breaking pitches down. Unfortunately that leaves his fastball vulnerable at times, to the point where hitters are nearly hitting .300 against the pitch (.291). Opponent's wOBA is almost 100 points higher against the fastball as opposed to breaking pitches (.414 vs fastball, .321 vs breaking pitches).
All five of the home runs that De Jong has surrendered this season has been due to the fastball as well.

You can see De Jong's heavy usage down in the strike zone with his breaking pitches that has held batters to a .257 average and .321 wOBA. He has a 23.7% K rate on breaking pitches and opponent's are making less solid contact (86.8 EV vs 92.1 EV on fastballs).

What does it all mean?

Coors Field may be a little tricky for De Jong with the way he pitches. He's allowed five home runs off of fastballs this year. So he could be in for some trouble if he falls behind early.
De Jong was one of the stars of spring training, and carried it over to the minor league season. We knew he was going to get an opportunity at some point this season. He's done well with his playing time, despite what some of his numbers say.
What are your thoughts on De Jong this season so far? What are your expectations for him tonight against the Rockies? Let us know in the comment section below, subscribe to the site with the link at the top of the page, and follow us on Twitter @SportBlogMurphy.
Also follow me on Twitter @AJ_Murfy.
Chase De Jong MLB Pittsburgh Pirates
Location: Virginia, USA