In The Pirates System: Who is the next callup? Watching the Indianapolis Bullpen

With another week of minor league baseball getting ready to kick off, there are no shortage of things to watch for in a deep Pittsburgh Pirates system. Here are some things I'm going to be looking for over the next week.

Next Man up in Indianapolis?

If you didn't see it, or even hear about it at this point, Max Kranick had himself quite the debut this past Sunday, pitching five perfect innings in route to his first big league win. That got me thinking, who might be next after him?

The answer might lie in the Indianapolis Indians bullpen.

While the safer, easiest, and best answer to that question may fall to Austin Davis (just recently sent back to Indy), Geoff Hartlieb, Kyle Keller and Nick Mears - all four are already on the 40-man saving the hassle of making another roster move - the Indians have some intriguing names not already mentioned.

Tyler Bashlor has enjoyed a strong start to the season, with a 1.65 ERA in 16 1/3 innings pitched, holding his opposition to an .197 average. The only issue is that he's kind of a known commodity at this point in the majors (0-6 6.30 FIP over 62 1/3 innings with the Pirates and New York Mets).

26-year old Joe Jacques was 33rd round pick out of Manhattan back in 2018. He climbed three levels in 2019, his first full season in the season and is now pitching out of the Indians bullpen. The left-hander has posted a 2.33 ERA in 13 games this season, earning a save and striking out 24 batters in 19 1/3 innings pitched.

Keeps it a 1 run deficit by making it look easy 🔥

Maybe the most intriguing out of the group is former fourth round pick Braeden Ogle. Originally the 86th ranked prospect in the 2016 draft, Ogle dropped due to concerns of him signing, and the Pirates grabbed him up and added him to the system.

Ogle is tied for the second most appearances on the team, and has the most innings from any pitcher not to start a game this year for the Indians. He has struck out an impressive 28 batters in 21 1/3 innings, but has walked 19 as well.

Shea Spitzbarth looks to be the long shot of the group. Both Jacques and Ogle are Pirates draft picks, while Spitzbarth was claimed off of waivers late last season. He's been the best reliever so far for the Indians however, posting a 3-1 record with a 0.97 ERA with 15 strikeouts in 19 1/3 innings pitched.

Getting any of these three to Pittsburgh would require an additional move of dropping another player off of the 40-man roster, not something that you want to do when you have four other players already available to you.

We are starting to get into the thick of the schedule, and the Pirates are in the middle of a stretch of 20 games in as many days. We just saw Cody Ponce come up to provide bullpen relief, and he likely won't be the last move made to take some of the pressure off.

The Pirates also have consecutive day streaks of 13, 10, and 13 throughout the rest of the season. So they are going to need as many arms as they can get to help them through it.

Ogle is the most intriguing arm out of the bunch, and the Pirates are obviously high on him after spending 2020 at the team's alternate training site. He would need a spot on the 40-man, but that shouldn't be hard to create when the Pirates deem him ready.

It took him a little bit to adjust to Double-A, but you can start to see the power starting to emerge more for Cal Mitchell. Over the last two weeks, Mitchell has posted a .587 slugging percentage, and has hit three home runs in that span (has six total on the season). 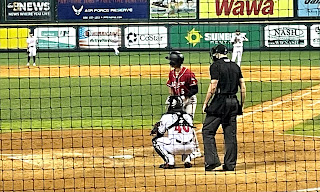 Greensboro Grasshoppers: This is what we've been waiting for

For the second time this season, this week's slate of games for the Grasshoppers will be televised for those with a MiLB TV subscription. This week comes a special treat, as 2020 first round pick Nick Gonzales is back in the lineup this time around.

Gonzales has been exactly what we have expected in his brief time this season, and now we get to see the potential double-play tandem with Liover Peguero for the first time live. It's definitely an exciting time.

Outside of that, can't expect Carmen Mlodzinksi to stick around too much longer if he keeps pitching like he has. Omar Cruz got the call to Altoona first, but the Pirates competitive balance pick from last year could join him soon.

After getting hit around a bit against Winston-Salem (3 ER in 4 IP), Mlodzinski bounced back to complete six innings for the first time in his pro career, striking out nine in the process.

It's been a roller coaster ride for Marauders pitcher Eddy Yean, acquired in the Josh Bell trade with the Washington Nationals. After recording just one out in his first start this season (2 hits, 3 walks, 5 earned runs), the 20-year old Yean was named pitcher of the week for the Low-A Southeast division after he threw six innings of two run (neither earned) all the while striking out nine and walking none.

Yean is now 2-0 in his last two appearances, pitching nine total innings and only walking two while striking out 13 total batters. He's held his opposition to an .103 average, and .299 OPS.

Jared Jones recorded 12 outs on Sunday, 11 of them by ways of strikeouts in what was the 2020 second round pick most impressive start of the season.

Since being put into the rotation (4 starts now), the 19-year old Jones has posted a 3.07 ERA in 14 2/3 innings while striking out 24 hitters and walking seven. More impressively he's throwing strikes and missing bats (obviously with the 24 Ks), with 62% of pitches going for strikes while producing an 18% swinging strike rate.

Baseball-Reference lists Jones at nearly three years younger than the average pitcher at his level, and he is still dominating.

What are you looking out for this week in the Pirates system? Let us know in the comment section below, subscribe to the site with the link at the top of the page, and follow us on Twitter @SportBlogMurphy.