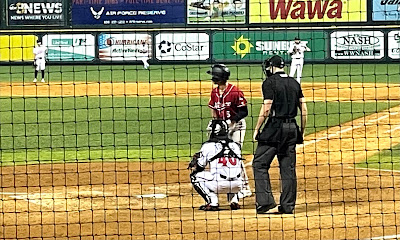 Here's a rundown of the minor league action in the Pittsburgh Pirates system that featured four games across three teams. The major league team may have gotten rained out, but there was plenty of action to make up for it in the system.

After managing just seven hits through the first two games of the series, the Indians offense exploded for 10 runs. Only Christian Bethancourt and Dee Strange-Gordon, playing in his first game within the Pirates organization, where held without a hit.

Steven Wright got the win after pitching five innings of two run baseball where he struck out six batters. Braeden Ogle struck out all three batters he faced in relief, and Blake Weiman thew two frames to close out the contest.

Josh Bissonette hit record a RBI double that represented the entire offensive output for the Curve as their lineup continues to be hampered by injuries (Oneil Cruz) and call ups (Rodolfo Castro). Ji-Hwan Bae went 2-for-4 with a stolen base and was the only other player to record multiple hits in the contest.

It was an overall rough outing for the Grasshoppers, despite the seven runs put on the board. Jared Triolo went 1-for-5, but drove in two runs. Will Mathiessen (3rd) and Grant Koch (4th) both went deep on a night that the Grasshoppers were also able to draw seven walks.

Liover Peguero went 1-for-2 on the night, drawing three walks but also committed his 14th error of the season.

Braxton Ashcraft started and only lasted 3 1/3 innings, allowed five earned runs but also struck out six batters. Alexander Manasa came on in relief and got hit with the loss after allowing three earned runs in 1 1/3 innings.

An Endy Rodriguez single in the bottom of the fourth inning represented the only hit of the game for the Marauders, who dropped the first part of the double header. Despite only managing one hit, they did their best to create base runners - drawing eight walks in the seven innings played.

Santiago Florez put in another great performance, pitching five innings and striking out eight while allowing just one run but it wasn't enough to prevent him getting the loss. Bradenton also committed three errors defensively.

Nick Garcia pitched a season high five innings, allowing just a lone hit as the Marauders returned the favor by pitching an one-hit shutout of their own in the second game of the double header. Oliver Mateo pitched the other two innings of the contest, striking out four batters.

Francisco Acuna hit his first home run with Bradenton, a three run blast to open up the scoring. Hudson Head also went 1-for-3 with an RBI of his own.

What was your stand out performance of the night? Let us know in the comment section below, subscribe to the site with the link at the top of the page and follow us on Twitter @SportBlogMurphy.