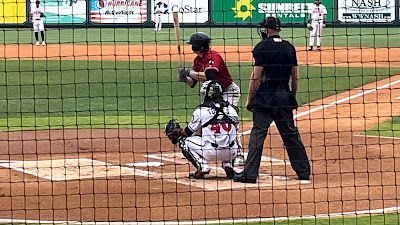 As another week of minor league action kicks off, we were treated to some nail biting finishes, along with a high-octane offense carrying on despite missing some of their big bats. Here is a run down of the Pittsburgh Pirates organization for July 6.

A Trenton Brooks walkout single in the bottom of the ninth proved to be all that the Clippers needed to earn the series opening win, limiting the Indians to just three hits. The middle of the order produced the only damage, with Will Craig, Bligh Madris, and Hunter Owen each collecting a hit.

The good out this game was the performance of Mitch Keller, who put together five innings of shutout baseball, striking out four and allowing two hits. The best part of the outing? Keller didn't walk a single batter and 69% of his pitches were for strikes, a huge development for him.

This might be a tough week for the Curve, although you couldn't tell from the results Tuesday night. Missing three of their four Opening Day infielders didn't matter, because the one they still have is destroying the ball right now.

While Tuesday is usually #RoansyDay, forearm soreness forced him out his start, and Cam Vieaux filled in and did his best Contreras impression. In five innings, the former sixth round pick allowed just one run and two hits while striking out five. The bullpen struggled to close things out, allowing eight runs over the last four innings, but was able to close things out.

Powered by the long ball, the Grasshoppers landed four home runs in their victory against Asheville. There isn't too much more you can say about the season that Matt Fraizer is having, other than just amazing.

Please excuse my dad and I going crazy😂 pic.twitter.com/DB2DG2CdVO

Not just happy with his 12th home run of the season, Fraizer's 13th of the season walked-off Greensboro in the bottom of the ninth, giving them a 7-5 win.

Quinn Priester started and completed five innings, walking two more batters while striking out three. Of his 75 pitches he threw on Tuesday, only 43 went for strikes (57.3%).

This game was postponed due to being in the current path of Hurricane Elsa. The game is planned to be made up as a part of a double-header on Thursday, July 8.

Due to the path of Tropical Storm Elsa, tonight's game against the Clearwater Threshers has been postponed.

Who was your biggest performer from the night? Which was the best game of the night? What are your thoughts of Keller's performance in Triple-A? Let us know in the comment section below, subscribe to the site at the link at the top of the page, and follow us on Twitter @SportBlogMurphy.