So, it wasn't an ideal game for the Pittsburgh Pirates - again - but we were left with a couple of special moments by ways of one Rodolfo Castro. It also wasn't an ideal start for Max Kranick, who was hit hard again and seems to be a far cry from his debut when he tossed five perfect innings against the St. Louis Cardinals.

Kranick, 24, was the Pirates 11th round pick out of Pennsylvania back in 2016, but could have gone higher in the draft if not for a strong commitment to the University of Virginia. The Pirates were able to lure him out of going to school by offering Kranick an over slot deal worth $300,000.

He worked his way up the system, going one level at a time, spent 2020 at the Pirates alternate training site and made a fast rise up from Double-A, to Indianapolis before reaching the majors.

You couldn't have asked for a better debut from Kranick, who pitched five perfect frames against the Cardinals.

From there, Kranick was recalled to make a couple of spot starts, where he allowed seven runs in six innings through two starts against the New York Mets and Arizona Diamondbacks.

And then Wednesday night happened against the Milwaukee Brewers, as he was beat up for six earned runs on ten hits in five-plus innings. He was hit hard throughout the night, as he had over half of the batted balls put into play above the 95 MPH threshold. 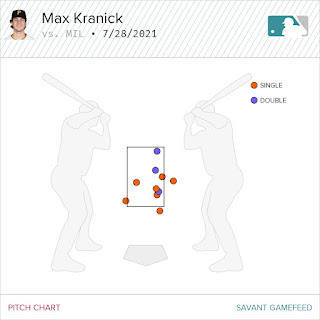 He was hit hard, leaving far too many pitches over the middle, ripe for the Brewers to take advantage of. The double at the top of the strike zone was from a hanging slider that Kranick threw to Luis Urias.

Kranick, 24, has struggled with this metric throughout the season. Of all Pirates pitchers with at least 50 batted balls in play, the righty has the highest average exit velocity on the team. He also ranks near the bottom of hard hit percentage - along with Mitch Keller, Luis Oviedo and Chase De Jong.

The fastball has been an issue for Kranick, and while the overall numbers don't speak too bad about the pitch, his underlying numbers speak to what we've been seeing. Launch angles and exit velocity goes a lot into determining what a player's expected average will be, so it's not surprising Kranick's number can potentially balloon up. 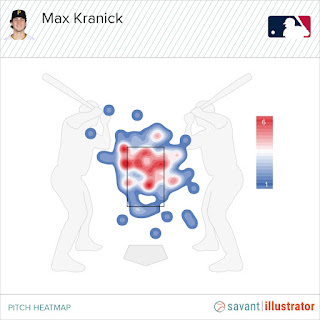 Part of the issue his is command with his fastball in the strike zone, as you can see in his heat map for all the times he has thrown the pitch this season. This would have to do a lot with all his expected numbers to be higher than what they actually are.
The slider, however, seems a little more encouraging based off his early results. It currently holds an 2.2 RV/100, meaning his slider has allowed an extra two runs above average per 100 times he throws the pitch.
The underlying numbers though say that his slider could actually be the put away pitch that Kranick has been missing. His curveball also showed promise on Wednesday, generating a 45% whiff rate. 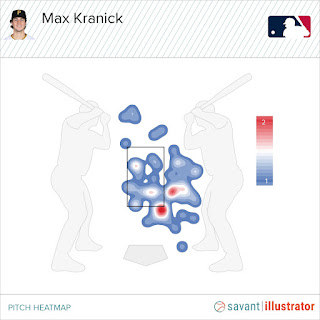 As you can see, Kranick has done a good job avoiding leaving his slider in places that's going to hurt him. He's paid for the few that strayed away from this, but if the majority of them are landing in these areas he should be fine over the long term.
One thing that young pitchers have to learn to stay in the majors as a starter is how to properly utilize their secondary pitches and create the proper amount of deception to get batters out deep into the game.
When I say deception, I don't mean hiding the ball, but mostly keeping the opponent off balance and not be too predictable. Kranick has been money the first time through the lineup, even with the struggles against the Brewers.
The righty has held opponents to an .542 OPS the first time through the opponent's batter order. Things have turned into a struggle after that, with hitters posting a collective 1.049 OPS the second time around the lineup. Milwaukee was the first time Kranick went through the lineup for the dreaded third time, and it showed, with the Brewers slugging their way to an 1.339 OPS.
As far as being too predictable, Kranick has been hit hard early in the count. Knowing what's likely coming, the opposition has an .967 OPS when swinging on the first pitch - 1.667 when it's an 0-1 count. Pitchers are supposed to be at their most effective when getting ahead, but fastball command has cost Kranick his advantage.
The good thing with all of this is that it seems fixable. While it's certainly impressive how quickly Kranick climbed the ladder this season, he still has only nine total starts above Class-A. While other prospects the Pirates have eased along, they had no problem pushing Kranick and while the raw makeup is there, he's still going to need some ironing out.
Whether that's going to be in Indianapolis or in Pittsburgh, continuing progression of his secondary pitches (Fangraphs mentioned the emergence of 'bat-missing secondary pitch') as well as his fastball command will lead to Kranick reaches the height of his potential.
Follow the page on Twitter @SportBlogMurphy, and make sure you subscribe to the page with the link at the top of the page.
Also, follow me on Twitter @AJ_Murfy.
Max Kranick MLB Pittsburgh Pirates
Location: Virginia, USA