Pittsburgh Pirates: Chase De Jong Experiment Needs to End, But is it That Easy?

There isn't any denying that Chase De Jong was one of the better feel good stories during Spring Training. The journeyman was seen more as a depth option, but pitched well enough to get noticed to be thought as a potential call up at some point in the season should the Pittsburgh Pirates needed an extra arm.

He even pitched solid when he got the call to the majors, throwing five innings of one-run baseball while striking out five in his season debut against the Colorado Rockies. 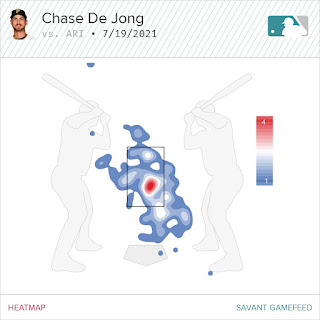 Even with the moments in which he has looked good (earned his first of the season against Atlanta with five innings pitched and only allowing one run), there has been far too much of the bad. Now after his performance against the Arizona Diamondbacks (5 IP, 7 H, 4 ER, 2 BB, 6 K, 3 HR), De Jong has allowed four or more earned runs in four of his last five starts.

His ERA is nearly six now after Monday, and he is starting to get hit really hard in the process. Just against Arizona, De Jong had eight hard hit balls against him (exit velocity of 95 MPH or higher) and was barreled up against three times.

So what's the next step for the Pirates when it comes to De Jong? Wins and losses aren't really a concern in 2021, although they would be nice - from a morale perspective and much more - but things are just a tad more complicated than just DFAing him like they did with Kyle Crick.

It's not a secret that the Pirates are playing for the future but even so there are games to be played - 68 to be exact - here now in 2021. To get through those games, win or lose, they are going to need someone on the mound pitching. In an ideal scenario, someone who can throw at least five to six innings to lessen how much the bullpen has to throw.

Say what you will about De Jong, he has pitched at least five innings in seven of nine starts now this season. He's eating up some innings, something the Pirates need to get through the rest of the season. Him eating innings at the major league level allows the Pirates to keep at least some depth in the organization, as it keeps some arms in Triple-A that could move up in case of injury.

So do the Pirates have that kind of depth they can afford to DFA a player they know can get them through the rest of the season?

Or at the very least, they are approaching that point. At the current moment, there isn't anything you can say that would make anyone favor having a 27-year old pitcher ahead of a 23-year old who you paid over slot bonus money to sign in Max Kranick.

Getting to see Kranick even more helps to see where exactly he stands within the organization and what kind of future prospectus he has as a starter. Keeping throwing De Jong out there every fifth day is the literal definition of madness.

Steven Brault, even if it isn't as a starter at first, can also help get through some innings as he is a proven player in the league that has played in a swing role before. He's rapidly closing in on getting back to Pittsburgh after making another rehab start over the weekend

Speaking of getting healthy, Miguel Yajure gave us a tease on his Twitter page that he was back throwing. There still isn't an official time table for his return, but that's certainly a welcome sight. He would be another arm down the stretch.

They need Luis Oviedo to pitch a little bit more in the majors to meet the Rule 5 minimum requirements, they still have Cody Ponce and Mitch Keller in Triple-A. Keller's situation is it's own topic for a different day, but he still remain options at this point.

It was a nice story for a while, but it's time to move on from the De Jong experiment. Let Monday night be that final straw, but I guess we will have to wait and see.

Other notes from the game

> I'm not the only one just a tad concerned about the lack of power from Ke'Bryan Hayes, am I? The average is starting to come back up, which is the important thing but he has just one home run this month and six extra base hits as well. Would be something interesting to look into. The league is definitely adjusting to him, and he's learning to do that in return, but that has cost him almost all of his power.

> The John Nogowski has been a sight to be ahold, and while he deservingly build the kind of cult following to where he probably will never have to buy his own beer in certain bars in Pittsburgh, it's been Ben Gamel that has impressed me the most by far.

He doubled again today and is playing solid defense in the outfield. I don't know what the future holds in the outfield, but he's playing his way into it however that ends up being.

> This isn't related to the game, but it did happen on the day of it. Crick was DFA'd by the Pirates on Monday and I'd imagine there's a good chance someone claims him on waivers. He hasn't been good for some time for the Pirates, but that slider is statistically a really strong offering, so someone will put a claim in or offer cash to see if a change in scenery does anything.

The move wasn't shocking, it was the correlating one in adding Dillon Peters from the Los Angeles Angels that was the head scratcher. It adds another body, yes, in preparation of losing Crick, but at what point to you stop picking the waiver wire/acquiring from outside the organization before you truly start looking within.

If the Pirates wanted another lefty available to them, Braeden Ogle has been pitching great for the Indianapolis Indians. The front office themselves were big on them when they added him to the alternate training site. That seemed like the more logical move than trading for Peters.

But I guess we will have to see how the rest of the season plays out.