Since both the DSL and the FCL leagues have gotten underway, I've been giving you guys little updates on Twitter as the game went on. Now that the response has gotten good feedback, I figured, why not give you guys a recap article daily on all four squads. Saturday, July 24th, was supposed to have both the DSL Black and Gold Pirates face off as well as the FCL Black and Gold Squads squaring off. Unfortunately, the FCL game was canceled, so we were left with just the DSL game.

The Black squad managed to get eight hits in total as a team where the 19-year-old Ronny Sanchez and 17-year-old Omar Alfonzo had half of the teams' hits. Alfonzo went 2-2 while drawing a walk and getting an RBI on a single. Ronny Sanchez went 2-4 with an RBI on a fielder's choice and scoring a run. The only other player to get an RBI was the 17-year-old Ruben Vizcaya, who went 1-3 on the afternoon and drew one of the team's six walks. One of the top international free agents, Shalin Polanco, continues to struggle and is now just 1-24 to start his professional career.

(Side Note) Ewry Espinal went 1-3 with a double and two runs scored. 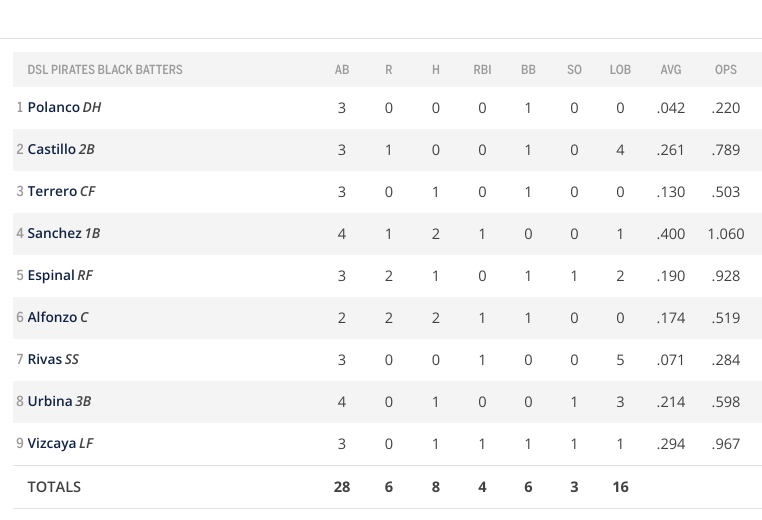 The pitching started with the 18-year-old Diego Chinquilo, who started his professional career on the 17th, where he went just 0.2 innings, walked four, and gave up one run. Today's start wasn't much better; Chinquilo went 2.0 IP, three hits, three earned runs, three walks, and one strikeout.

17-year-old Andres Sierra came on to pitch the next 2.0 innings of work. Despite walking two batters and giving one hit, Sierra has yet to give up an earned run. In his previous two outings, Sierra gave up four unearned runs. Sierra was signed in January of this year out of the Dominican.

Luis C Gonzales, Wilbur Martinez, and Eliecer Romero (all 19-years old) would pitch the final three innings of work, each pitching a full 1.0 innings. All three pitchers gave up a combined four hits (three coming from Romero), walked one (Martinez), and no runs given up. It looks like the game was scheduled to go nine full innings but ended after the 7th inning.

The Gold Squad also saw eight hits in the afternoon. Much like the Black Squad, the Gold Squad had two hitters get half of their hits. The two individuals are Esmerlyn Valdez (2-4 with a double) and Rubel Lebron (2-3); both kids (literally) are 17-years-old. Out of the four scored, only one resulted in an RBI (Jeral Toledo RBI single.) The rest of the runs that were scored were due to wild pitches (2) and a fielding error (1). Just like the Black Squad, the Gold drew six walks. 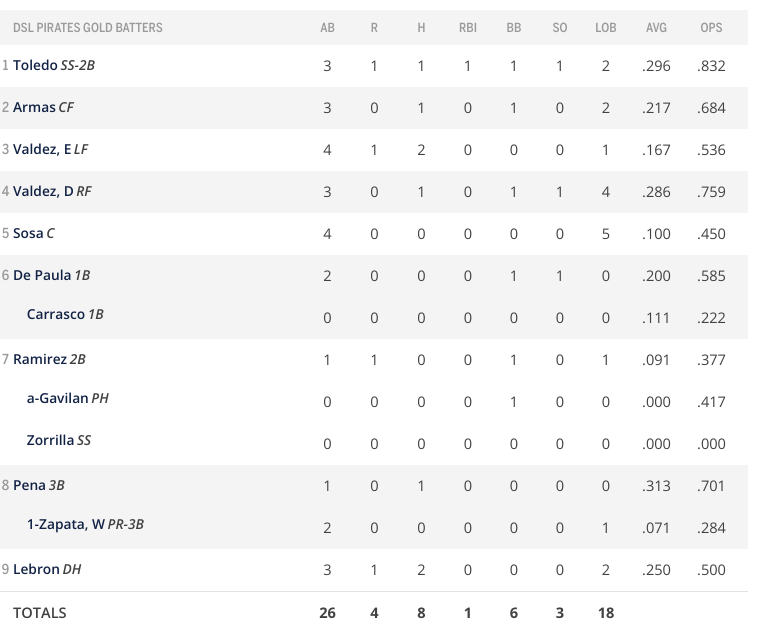 The left-handed 18-year-old Yojeiry Osario started the game for the Gold Squad.  After just 0.2 innings of work, two earned runs, and two walks in his professional debut on July 17th, Osario looked to have a better outing. Osario did manage to go 3.0 innings, but he did get touched up, giving up five hits, walking one, and giving up two earned runs. We all need to take in is all of these pitchers are young, so everyone will take their lumps.

The next three pitchers to come in were Luis Brito (19-years old), Keneth Quintanilla (18-years-old), and Luis Joseph (19-years-old). Brito's line read 2.0 innings, two hits, one unearned run, four walks, and one strikeout. Brito had a rough time with control again and has now raised his total walks to eight in just 3.0 innings of work.

Quintanilla got off to a very good start to his day, striking out the first two batters he faced but then was cut short after a rain delay in the 6th inning. This game was Quintanilla's professional debut, and he seemed to be off on the right foot. (DAMN YOU, MOTHER NATURE!!)

Joseph finished out the last 1.1 innings of work and got tagged with the loss and a blown save. His line read one hit, three earned runs, one walk, and no strikeouts. Joseph has now appeared in four games and has held opponents to a .150 average in 5.1 IP.

I'm assuming that the weather wasn't looking good, and that was why the game went just seven innings (Guess). Overall we saw very young ballplayers work out the kinks in their game. As evident with the walks, wild pitches, and errors, these young men have a long way to go, but I know watching them grow will be a fun process.