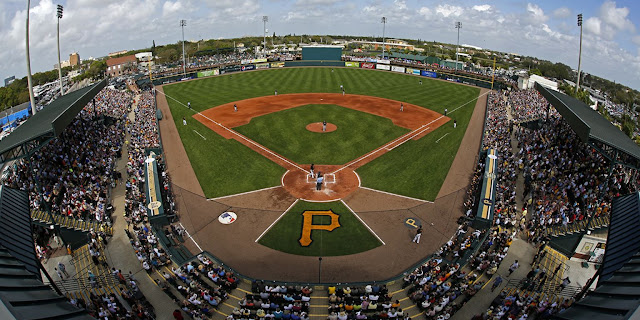 He may be a stranger to some who aren't familiar with the Pittsburgh Pirates system, but Adrian Florencio has been one of the better pitchers in the lower levels of the organization. If you've read this site, then his name should be familiar, as he was featured once already this season.

With the month he is having in August, it's worth mentioning his name once again.

Towering at 6'6", the Dominican righty has been a force in the Bradenton Marauders rotation this season, and after his stellar start on Thursday is riding a 16 inning scoreless streak.

In game two of the double header against the Clearwater Threshers, Florencio pitched five shutout innings, allowing two hits and two walks, while striking out nine batters total. Clearwater has been a dream matchup for him this month, as in his two appearance against the Phillies farm team Florencio has 18 strikeouts in 11 shutout innings.

Altogether in the month of August, he has 23 strikeouts in 14 innings pitched - all without allowing a run. That's coming off of months where he posted a 3.20 (July) and 4.05 (June) ERA, respectively. He's been good for the majority of the season, but this month he has really taken off.

How good has he been? Florencio currently sits in a tie for first in strikeouts in the Low-A Southeast division. He leads all pitchers in innings pitched, and of players in the top 20 of that category Florencio is one of two with a sub-3.00 ERA.

Adrian Florencio loooves to challenge with the high heat. He will have to figure out other ways to get outs when/if he gets the GBO call but maaaan is it fun to watch him in @The_Marauders. *side note this was taken from his last start. pic.twitter.com/2lAmRz2iO0

While all of that has been good, still the most impressive number that Florencio has produced has been 0.36 - which is the amount of home runs he has allowed per nine innings pitched. He's allowed three home runs in 75 1/3 innings pitched this season.

The Pirates recently broke a franchise record for most players used in a regular season. A lot of that can be attributed to throwing everything against a wall and seeing what sticks during a rebuilding year. As things turn, they will also need that kind of depth to make sure they can get through an entire regular season without falling apart.

Having someone like Florencio succeed at the lower levels shows again just how deep the Pirates system is. It's a player that will likely never play his way too high up the prospect charts, but will always someone to keep an eye out as he moves up the system.

With the way that pitching staffs are now, you are going to need as many as you can get to get you through the season. The San Diego Padres are in the middle of a meltdown right now because they literally are having to grab people off the street to pitch for them (Jake Arrieta), so they don't have to constantly have 'bullpen' games.

So while he may never be a part of the 'planned' rotation, Florencio can easily work himself into position to be in a 'next man up' situation.

Some other notes from Bradenton

- The Marauders left 23 runners on base in game one and then another 11 in the night cap. They've come up with some big hits in clutch moments, but there were plenty of opportunities to put the game out of reach before then.

On the flip side of things, Clearwater left 29 batters on base. There was so many different ways these two games could have gone, but didn't.

- The doubleheader sweep also gave the Marauders five straight wins by ways of walk off, sort of. Not sure where the game that was continued from another day falls into place.

It was a continuation of a game from July that wasn't finished until Tuesday. You can at the very least say we've seen five walk off being hit since Saturday for the Marauders. They keep the suspense going.

You can follow us on Twitter @__Murphy88 and @SportBlogMurphy. Also, you can subscribe to the site by using the link at the top of the page.