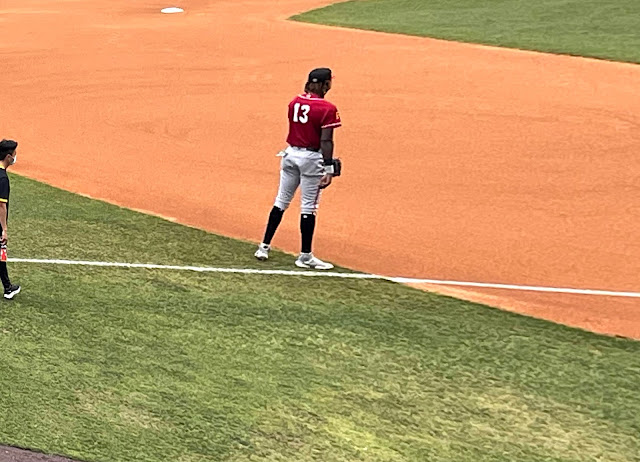 Baseball America released their updated prospect rankings on Wednesday, now that we are past the deadlines for both trades and for each team to sign their respective draft picks. They gave out their top 30 for each respective teams.

It was going to be interesting to see where some of the new players the Pittsburgh Pirates acquired was going to be placed within the organization, and how that would impact the ones already playing in it.

The article itself is behind a paywall, so I won't give out the entire list out of respect to them but I did want to go through some notable names and where they were positioned. There were some surprises, everybody evaluates prospects a little bit different, but more or less it was a lot of the same.

They got off to a quick start with the surprises. While Cruz is generally considered one of the top prospects in the Pirates system, and in all of baseball, not sure there are many places that have him at the top of the list.

When you think about it though, doesn't it make sense? Cruz was having a great season when forearm soreness shut him down. His raw power is off the charts, and he has one of the best arms in the minors. Add in the fact he's 6'7" and has the athleticism to stay at shortstop, ok maybe this shouldn't be a surprise.

The highest ranked of the deadline acquisitions, it seemed unfair to label Marcano at any specific position as he has seen playing time almost all around the field. Baseball America did mention progression with his power was the main reason for the climb.

Clearly Marcano was a personal favorite of Ben Cherington, as he was willing to pay the rest of Adam Frazier's salary to be able tot land him. So that's certainly worth mentioning.

This was maybe the first real surprise, as MLB.com has him ranked in the 20s, and Fangraphs has him in the 30s. Baseball America is big on him though, and when looking at his stuff along with his numbers it actually isn't a stretch.

Burrows has used his mid-90s fastball and big breaking curveball to generate a 36.4% strikeout rate. A lot of eyes were on the Greensboro rotation for the amount of firepower that was on it, and you can make a case that Burrows was just as good as any.

This isn't too much a surprise, and this could only be the beginning of Jones' climb up the system charts. Jones turns 20 in a couple of days, making what he has done in Low-A that much more impressive. He's showing his advanced feel for pitching, and is only going to be better.

Finally some respect for one of the biggest fan favorite prospects in the system. Fraizer leads the system in home runs and can play center fielder, so what kept him from skyrocketing up the prospects charts? We don't really know. Age and a hitter friendly ball park could have something to do with it, but finally getting a promotion to Altoona could fix that, and send him even higher up the rankings.

The other piece in the Starling Marte trade along with Liover Peguero, we haven't seen much of Malone this season. He got a late start to Bradenton, struggled in a couple of outings, got sent back to extended spring training and has now missed time with an injury.

It isn't a matter of stuff for Malone, it's a lack of being on the field to get playing time. It doesn't help that the small sample size we got of him wasn't good.

Martin is maybe the most recognizable power hitter in the system, and is one of the top ranked first base prospects on MLB.com.

The main concern with Martin has always been the strikeout rate, and the really alarming thing according to Baseball America has also been the declining walks he has generated. Being a first base only prospect also limits his ranking.

Just how much Martin is able to cut down on strikeouts has always been the puzzle he will have to figure out to determine just how much an impact he's going to make at the major league level. It's fun to think about the damage he can do at PNC Park, and just because he isn't ranked doesn't mean he still can't do that.

What did you think about the rankings? Was there anyone you thought should have been ranked higher? Lower? Let us know in the comment section below, subscribe to the site with the link at the top of the page and follow us on Twitter @SportBlogMurphy.