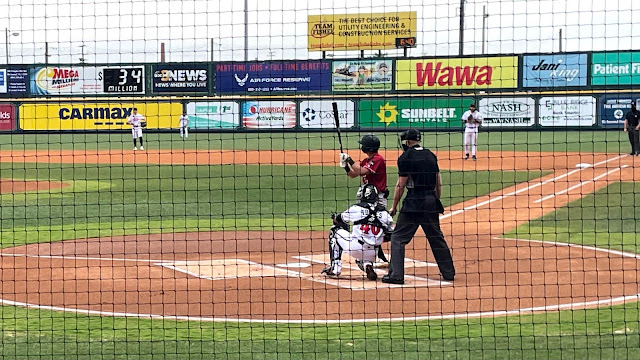 Due to having to make up a game that was postponed, the Altoona Curve and Akron RubberDucks had a rare opportunity to settle a series that would have otherwise finished in a tie at three a piece.

Carter Bins led things off for the Curve, with an RBI single that scored Diego Castillo in the top of the first inning, giving Altoona a quick 1-0 lead.

Castillo himself had quite the game, reaching base his first four plate appearances. The recently acquired infielder reached on an error, walked twice and hit his 13th home run of the season, a solo shot in the third that extended Altoona's lead to 2-0.

The 23-year old native of Venezuela finished the night 1-for-2 with three runs scored, the home run, and an RBI.

Altoona did the majority of their damage in the sixth inning, plating four runs to make the score at the time 6-0. Matt Fraizer hit his first triple in an Altoona jersey, making three of his six hits this week of the extra base variety.

He would score on a Josh Bissonette sacrifice fly. Connor was up next and hit his third home run of the season. Ji-Hwan Bae doubled as the lineup turned over, and a batter later Jack Suwinski drove him in with a single.

In total, the Curve scored four times in the sixth inning on four hits and a walk.

After allowing five runs in the eighth and heading to extras, we score two in the 10th on a sacrifice fly and this blast from @Bae_ji_hwan! We lead it by two entering the bottom of the 10th!

Due to having to play seven games in a six game span, Osvaldo Bido was forced into action again and pitched brilliantly in his four innings of work. The 25 year old righty allowed just one hit and walk while striking out three batters. Of his 58-pitches, 37 of them were for strikes.

On Saturday, Akron used a 10 run eighth inning to secure a victory for them, and while they didn't score as many runs on Sunday - they launched their comeback effort in the same frame as the night before.

Akron scored five runs in the eighth inning, and Altoona had to use three pitchers to get out of the frame to ensure at least being tied.

The RubberDucks recorded four hits, three doubles, and drew two walks on their way to tying things up. Nathan Kirby struggled and allowed three runs in 1 2/3 innings, with Will Gardner allowing two of the three batters he faced to reach base - both scored.

A scoreless ninth from both sides forced extra innings, where Altoona would take a 9-7 lead in the 10th with a Kaiser sacrifice fly and Bae home run.

News and notes from game

- Fraizer is showing that power in his bat can translate to the next level up, hitting two doubles and a triple in his first week at AA. Sunday didn't start out great for him, as he struck out in his first two at bats.

- Speaking of not getting off to a great start, Bae started the game 0-for-3 with two strikeouts. His next three times to the plate, double, double, home run. The 22-year old from South Korea has shown more power in recent weeks, a welcome development for his prospect status and potential long term future with the Pirates.

Maybe the most impressive thing of the day for Bae was him waiting on both his doubles so that he can drive them the other way. When you are not a big power hitter, you can get a little pull happy trying to muster all you got, but Bae was patient and hit what they gave him for extra bases.

- It was a rough game for Cal Mitchell, going 0-for-5 with three strikeouts. He also left seven people on base, almost half of the team's total.

The entire Pittsburgh Pirates affiliated organization has Monday off, with Altoona preparing for a week series against the Erie Wolves.