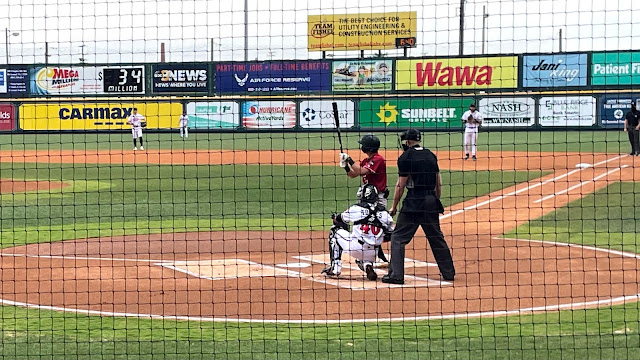 We have officially come down to the final stretch when it comes to the minor league season, as there are just six weeks left.

It's been a great feeling having more than just the major league level playing games this year, after losing an entire minor league season to the COVID-19 pandemic, and with 2021 winding down it's time to take a look at what's there is still to watch for the rest of the way.

Here are three things I am watching for the rest of the way in the Pittsburgh Pirates' system.

Who comes back from injuries

The Pirates haven't been hit hard at the major league level, but throughout the system have seen some of their bigger names go down with injuries. Braxton Ashcraft recently underwent Tommy John surgery and Travis Swaggerty also was lost for the year after dislocating his shoulder.

Cody Bolton also suffered a knee injury that has forced him to miss the majority of the year.

Between those injuries, the Pirates have seen some other names of note go down and miss time but are not believed to be aliments that would keep them out for the rest of the season. The name that potentially impacts the major league club the most would be Miguel Yajure, who recently started his rehab assignment in Bradenton.

The 23-year old from Venezuela has posted a 3.86 ERA in two starts this year for the Pirates, and has some of the best off speed/breaking stuff in the entire system. Depending on when he makes it back he is a legitimate candidate to earn a rotation spot to start 2022, if he doesn't finish this year with Pittsburgh.

It's hard to put into words just how good Roansy Contreras was at the beginning of the season, but we can definitely use numbers to try and quantify it. The righty Contreras struck out 35.5% of the batters he faced while posting a sub one WHIP in 46 innings before being shutdown with forearm tightness.

He's being eased back in, and it sounds like he is going to pitch again.

Michael Burrows and Carmen Mlodzinski both started the year a part of the vaunted Greensboro rotation that also featured Ashcraft, Quinn Priester, Omar Cruz (before his promotion to Altoona), and Tahnaj Thomas.

There is certainly some risk/reward in this scenario. These are some of the best pitching prospects in the entire Pirates system, so of course we want to see them get back on the field. The risk involved when it comes to pitchers has to be taken into account, especially since that where the Pirates are using a six man rotation in the minors, at most they could get an additional six starts in.

It doesn't seem like any of them, except Yajure on his rehab assignment, are going to be pitching in games this week, meaning that's at most five more starts left.

Now five starts are a lot for players like Contreras and Yajure. Both could play their ways into Pittsburgh at some point next year, Yajure first and eventually Contreras. Getting every bit of experience possible can only help their case into becoming factors for the Pirates at the major league level in 2022.

The others are at least another couple of years away, it would probably less pressing they get back as soon as possible.

This didn't even go into depth Oneil Cruz, who seems to be a little further away from returning to play. Surgery doesn't seem to be an option but it looks like the rest of the players listed above have a chance to return before Cruz does.

Does anyone else get promoted?

You can take a brief look over the box scores and get a good idea at who is playing good, and who isn't. While the minor leagues isn't all about the paper results, they do matter in their own way. But it takes more than those numbers to get promoted, and it's hard for us on the outside to know exactly what management is looking for when they give someone a push up a level.

It could be something as simple as a consistent mechanical adjustment in a swing. Or showing more of a comfort level throwing a secondary offering, even if it gets hit hard. Stuff that a lot watching don't know that's what management is watching.

That being said, are there anyone else that could get one last call up? Nick Garcia could be a candidate to get a few starts in Greensboro, as he is looking more and more comfortable in the rotation as of late. He got roughed up on July 27, but is finding more consistency as a starter each and every time out.

Cal Mitchell is in a slump that has seen his average plummet, so he may round out the year in Altoona. But he's made the kind of strides that could see him get a few at bats in Indianapolis.

Now that he is finding his power stroke a little more, Ji-Hwan Bae could be a candidate to move up. He had three extra base hits on Sunday, and has been hitting for a lot more power as of late.

He has even played a few games in the outfield, which can let him still get into games in Indianapolis despite a loaded middle infield group.

Jared Triolo could replace Bae in Altoona, as the former Competitive Balance-B pick is hitting over .300 for the Grasshoppers and has a .814 OPS. He also has 20 stolen bases on the season, so he can pick up some of the speed Altoona would lose with Bae going to Indianapolis.

Can Mason Martin break his slump?

Martin hit his 19th home run of the season on July 24th, which at the time was the most in the Pirates system. Since then it has been a struggle for the Curve's first base prospect. Since then he has gone 9 for 50 (.180) with 24 strikeouts.

That's right, Martin has struck out in nearly half of his at bats since his last home run. Strikeouts has always been a part of his game, but this isn't something we've seen from him before.

With some of the best power in all of the minor leagues, it seems it will be only a matter of time before Martin snaps out of this slump, but how long will it take?