Pittsburgh Pirates: How Dylan Busby Brings Me Full Circle As Season Winds Down 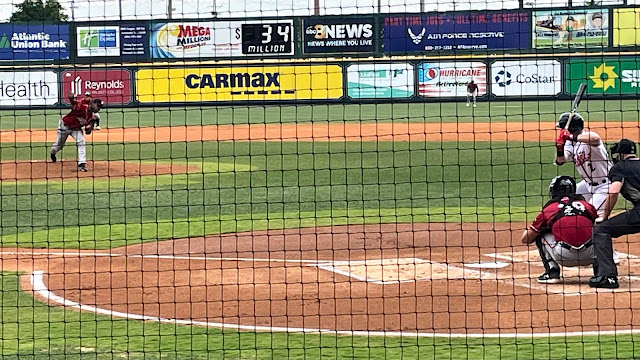 How does the saying go, 'it's a small world'?

Or it's crazy how things come full circle, right? Ran into some customers at work the other day that I had helped years prior as they were upgrading to new phones. As the process continued I heard them mention a few familiar names, and come to find out they are family of family, or something like that.

'Small world, right?' Is what one of them said.

Rewind back to 2015 I joined a website by the name of College Baseball Central, it was one of my first times actually 'covering' the game for an actual website. I wrote about the ACC for the site and that year a very hyped about freshman showed up on the Florida State campus by the name of Dylan Busby.

Busby would start in 57 of the team's 65 games at third base that year, hitting .242 with nine home runs, 15 doubles and 45 RBIs, earning Freshman All-American honors in the process.

His sophomore year he slugged .597% while leading the team in triples, home runs, multiple hit games and multi RBI games. Busby later participated in the Cape Cod League where he was named the fourth best prospect there by Baseball America after batting .322.

After a junior year that saw him launch 15 home runs and 21 doubles, as well as being named to the College World Series All-Tournament team, Busby was drafted by the Pittsburgh Pirates with the 88th overall pick back in 2017.

See where I went with that?

It's a small world isn't it?

While it was a cool 'hey I know that guy' moment when the Pirates drafted him, Busby has largely failed to build upon a college career that saw him hit for a good amount of power throughout it.

With the 2020 season being wiped out due to the pandemic, Busby began the 2021 with the Indianapolis Indians at the Triple-A level. He didn't wait long to make an impact, driving in a run on an RBI single in his first at bat.

Unfortunately, he played only four games before getting hurt and missing the majority of the season until recently returning to play. Busby played in three games in the Florida Complex League before being reassigned to the Altoona Curve, where he played Wednesday night - going 0 for 3 with a run scored, a walk, and two strikeouts.

Busby isn't some under the radar prospect. He won't be on some watch list going forward. What he is though is a nice little connection, another reason why I love this sport, and writing about it.

It's a cool 'come full circle moment' for me, as we wind down the minor league season, one where I'm proud to say I covered from start to finish with an article about a player I wrote about way back when I was still finding my footing.

For everyone that has been along for the ride, I can't thank you enough. You have no idea how humbling it is, and just what it means to me when you all take the time out of your day to not only ready what I post, but interact with me on social media.

I've put so much time and effort into everything this year that being able to talk about what I see and have a 'platform' if you will to share it has helped so much with my mental health. Realized how much this was helping me, even made a semi-career change to help reduce the stress I was under so that I can continue this.

Anyways, again, for those who read here regularly thank you. It means the world to me. If you are just finding this and want to follow me, you can do so on Twitter @__Murphy88, although that's probably where you found this link.

I have some big plans for the offseason, and brainstorming how to bring you even better coverage next year. Until then let's close out the season strong, here's your quick rundown of how things went down in the system.

>Hunter Owen and Bligh Madris both doubled for the Indianapolis Indians but the offense went quiet in a 3-2 loss. Shea Spitzbarth pitched a scoreless inning and there is almost no reason why he isn't in the majors right now.

>Altoona dropped the game in extra innings against the Bowie Baysox, but there was a positive to come out the game. Oneil Cruz hit his 11th home run of the season, a moon shot that the international space station will have to contact us when they find it in orbit.

>After a 2 for 5 game, Jared Triolo and Nick Gonzales are now tied for the batting title lead, both hitting .304 on the season. Blake Sabol hit a double and a home run, meaning there is a serious conversation that is going to have to be had about just exactly what kind of prospect he is. Liover Peguero was thrown out at home on a play at the plate in which he probably should have been called safe. That was the difference in the game.

Quinn Priester didn't have his best stuff, walking five in 2 2/3 innings. He even balked home a run after resetting on a mound visit before time was actually called. It was a weird sequence. The important thing is that he made it out healthy and with 2 1/3 innings during any kind of playoff would push him over the century mark, an amazing step in his progression.

>Some more conversations are going to be had, and will be over some of the prospects in Bradenton. There will be a full on article at some point, but Dariel Lopez will probably be on a short list for a breakout year in 2022 in the Pirates system. Also, when are we going to talk about Endy Rodriguez being as close to a top 10 prospect in this system as you can be without actually being one? Also, could he actually sneak into the top 10 at some point soon?

Lopez hit his 10th home run of the season, Rodriguez launched his 15th. They drove in five of the team's six runs on the night in their 6-1 victory.