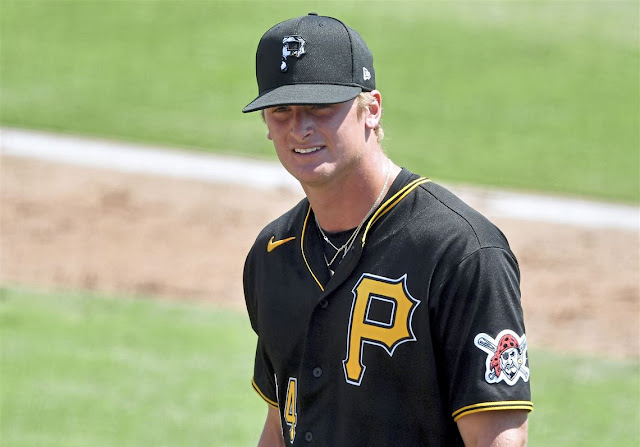 Continuing our post season recognition awards, we look at the Pitcher of the Year in the Pittsburgh Pirates system for 2021.

While it's been a rough season at the major league level when it comes to the starting pitchers, there is hope that is on the horizon. Several players emerged as legitimate starting pitching candidates this season, and now the Pirates are starting to show signs of actual depth in the system.

That also made this decision hard, but in the end thanks to his progress throughout the year and the longevity he showed, the man expected to lead the next wave of pitching prospects, Quinn Priester earns the honor of being named our Minor League Pitcher of the Year in the Pirates system.

The minor leagues are all about learning and making adjustments and maybe no player better exemplified that more than the former first rounder out of Illinois.

It wasn't and ideal start for Priester, who had plenty of hype going his way going into the season. Many believed the 20-year righty was in line for a breakout season that could see him vault up to becoming the best pitching prospect in the game.

In his first two starts, spanning seven innings, Priester allowed nine runs (six earned), looking far from the potential Ace many believed he could be going into the season.

But he learned and made the proper adjustments and pitched 10 shutout innings to close out the month of May.

The same thing happened in June. He allowed five earned runs in four innings in his first start of the month. He bounced back and allowed just three runs in 17 innings to close out June while striking out 20.

As the season progressed, we saw less of the bad and more of the dominant pitcher the Pirates thought he could be when they drafted him in 2019.

August 13th saw him strike out 10 batters across seven shutout innings against Winston-Salem. Two weeks later, he pitched six one-hit innings while striking out 13 against Asheville.

For the month of August, Priester posted a 2.35 ERA across 23 innings pitched. He struck out 23 batters compared to just eight walks.

One more time, after a rough regular season finale that saw him allow five earned runs in 2 2/3 innings, Priester's ERA jumped from 2.65 up to 3.04. With the addition of the players, he got one more time to show how he could bounce back from adversity.

With the Greensboro Grasshoppers down 1-0 in a best of five, Priester delivered an Ace like performance in a playoff atmosphere. Against Bowling Green, the righty allowed just one run on three hits while walking two and struck out seven across five innings eventually earning the victory.

While the early season performance of Roansy Contreras even generated it's own hashtag on Twitter #RoansyDay, it wasn't quite enough to overcome the two month absence with a forearm strain.

His numbers while he has played has been electric enough, but it wasn't enough to beat out Priester in the fan vote as well. Contreras pitched the first 18 2/3 innings of his season without allowing a run, and struck out 28 batters in his first three starts.

What did you think of Priester's season in 2021? What was the defining moment for him that you saw? Let us know in the comment section below, subscribe to the site with the link at the top of the page and follow us on Twitter @__Murphy88 and @SportBlogMurphy.